Our method uses enzyme catalysts, which, due to the intricate design of their active site, often have full specificity for one enantiomer only, and can transform relatively economical, achiral precursors into valuable chiral molecules. Using deuterated analogues of  the precursors allows us to use this process to produce deuterium-labelled chiral molecules. Our first target molecule was lactic acid, which exists as both D-lactic acid, and L‑lactic acid (Figure 1). Lactic acid is best known as the molecule produced in the body during exercise, but it is also of interest in the fields of material science and biomedical technology as the monomer for poly(lactic acid) polymers which are renewable, biodegradable and biocompatible.

The lactate dehydrogenase enzyme is responsible for the production of lactic acid from pyruvate during normal metabolism and exercise, and normally it exists in only the L-form producing only L-lactic acid. However, D‑lactate dehydrogenase, which produces and acts exclusively on the other enantiomer D-lactic acid, has also been expressed recombinantly in bacterial hosts. We first used D‑lactate dehydrogenase to produce perdeuterated D-lactic acid-d4. In addition to the enzyme, we used two deuterated reagents, sodium pyruvate-d3, which we can easily synthesise in our lab and sodium formate-d1, which is commercially available. The other components of the catalytic system, including a buffer, a coenzyme, an acid and water as solvent – were all standard, unlabelled reagents. We isolated the product as D-lactic acid-d4 and analysed it using mass spectrometry to determine the level of deuterium incorporation (Figure 2). Pleasingly, we could see that the molecular weight of the product was four atomic mass units higher than for unlabelled lactic acid (one atomic mass unit per deuterium atom). 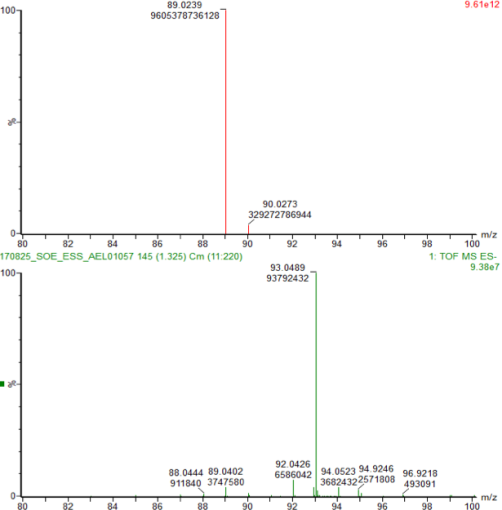 This process is equally applicable to producing perdeuterated L-lactic acid-d4, by using L-lactate dehydrogenase as the catalyst. Both samples will be used by our Deuteration Network (DEUNET) partners at the Jülich Research Centre (FZJ) in Germany to synthesise tailored poly(lactic acid) samples, which will be analysed by neutron scattering to correlate the arrangement of the chiral monomers with the structure and physical properties of the polymers.

The number of similar enzymes which are commercially available, and the substrates they accept, suggests that this method will have broad applicability in the synthesis of chiral deuterated molecules, and so, at ESS, we are developing this enzyme-catalysis to produce more novel perdeuterated chiral molecules which are presently unavailable.